skip to main | skip to sidebar

This blog has MOVED!!!

The journey continues folks...but not here on Blogspot!

You can find my new blog...including all of the posts and comments from this one over at wordpress. http://road2beautiful.wordpress.com/

Photo update and other ramblings 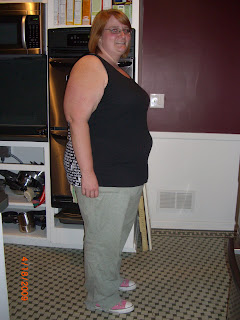 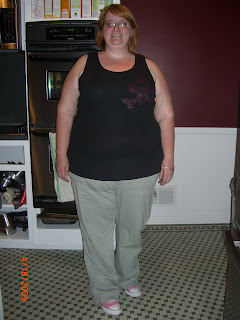 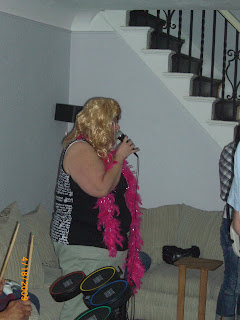 I think I look skinny here...ok skinny is relative...but seriously!
This shirt I am wearing here, I bought one week ago for a Rock Band Party, in which I wanted to dress in rocker attire! I think I did a decent job...hehehe or at least I had fun! The wig is an official Hannah Montana wig! Anyway, the point of pointing out the shirt is that I put the shirt on today since it was soo blazing hot outside and I have precious little to wear these days...and well...it is ALREADY getting looser on me! Woot! Woot!
I started my new job this week! Well, I started working outside of the training room anyway! I am officially a US Census Bureau Lister....which means I go around and systematically canvass every house in a given area and map every house, or what COULD BE a house! In 3 days I have walked 36 miles! Yes, I walked it! Today, I came home after 7 hours for a break and some lunch and was NOT sure I would be able to go back out...my feet were aching...surprisingly though after a bit of a break, I was able to go out and go pretty strong until almost 9 PM tonight! I am looking forward to not walking long distances for the next two days! Don't worry Aaron and Coach, I will figure in some other kind of workout that does NOT include walking!
I had another random thought...but I am fading fast here...oh well....Oh yes....eating. I have been pretty good on eating...staying within calories...the only thing I am NOT doing is eating more regularly. I eat breakfast, at some point break and grab lunch, then when I get home at approx 9 I eat dinner....and not really factoring in snacks and things...
I am looking forward to seeing what all this walking does for me on Tuesday! Seriously, if this is not a 5 lb loss week I might be upset! I have noticed that by the end of the day, my hands and feet are swollen, so I know I am retaining water....I hope that doesn't happen for the weigh in...any suggestions people on how to make that NOT happen? I am tempted to not work Monday...just to be sure that doesn't happen...but then that will screw me for the rest of the week and it will end up being another week like this one...mass hours in a short time frame!
Ok Goodnight! Much to do before I sleep....much to do before I sleep!
Grrrrr...I hate how when I post pictures....my paragraphs disappear and it looks like one long run-on paragraph.....another reason to switch to wordpress!!! Soon friends...soon!
Posted by Kim at 9:57 PM 2 comments:

Not Meant to Be ALone 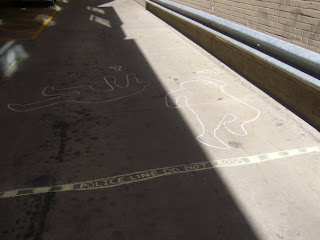 I am excited for my weigh in tomorrow, yet trying to not be overly so! I am 3.8 LBS from being under 300. So, if I lose 4 lbs this week....I will have a preceding 2 instead of a 3. I KNOW that this is completely possible. I have worked out 4 days this week. I have eaten well and within calorie ranges the whole time. I have not gone off track at all since Last Monday(ok, I might have gone a little over on Saturday...I had some beer). 50 LBS was a huge milestone! This is another one!

While I really would love to hit this milestone this week, I know that it is also possible that I won't. Not for lack of effort but simply because the body does strange things at times. SO basically, I am not expecting 4 lbs this week. I am not expecting to hit it....but man I sure am hoping!

In other news, I spent a lovely weekend in GR this past weekend. I had already been thinking about going, but then someone asked me how I was going to reward myself for my 50 lbs. There is no better reward at this point in the game for me than to spend time with my friends in GR. So I went! It turned out quite eventful!

Downtown Chalk Art Event- This was so much fun! I went with my friend Jonny D and we decided that a crime scene was in order to be drawn....by the police station and in an alley! But the best part was the camaraderie and sense of community as people from all walks and stations in life came together into the heart of this great city with one purpose...to cover the city streets in chalk! It was neat to walk down the streets, looking at the creations of others, to make eye contact with dozens of people and not simply exchange a terse nod or a "I don't really care kind of hello" but rather to engage in conversation with strangers! I loved it!

Rock Band- A few friends gathered to play Rock Band. Yes I am 32 years old. I have never really been a huge video gamer outside of the original Super Mario Brothers that came out when I was 10 or so years old, but I LOVE this one! Probably because you really do play it TOGETHER! You laugh with and at those that you are playing with. I KNOW that I cannot sing Wanted Dead or Alive...and really shouldn't attempt it...but in this atmosphere....who cares....it is all fun!

On Sunday I locked my keys in my trunk as I was loading my car and getting ready for church. Fortunately, kind Adam picked me up for church and I figured I would skip lunch with a few friends so I can make sure I get my car keys back in time to be back in Detroit for my 9 yr old nephews Baptism. Well, we ended up having lunch with friends...so lovely...then I went back to my car to figure that out.

To make a long story short...(as if that is possible for me) I got into my car but could not access the trunk. My trunk unlock button wouldn't work. I can only assume it is because neither the key nor the remote opened the doors. I couldn't climb through the back seats that DO fold down, because there is a release latch that needs to be pulled for them to fold down....which is in the trunk!

I was getting anxious now and thinking I would end up missing Gavin's Baptism. This is my first nephew to be baptized and it is awesome how at 9 years old he decided on his own that he wanted to be....another long story...suffice it to say I really really did not want to miss this!

In the end...I had a superhero step in. Adam gave me his car for the night. I could make it....if I left super quickly and bring his car back today (Monday), at which time I would continue figuring out how to get into my trunk! Adam is the hero for the day! I am incredibly grateful for him and his generosity!

In the end, my keys are out of the trunk and I have a spare that will unlock my doors if I ever lock them in again! I think I am going to make another one...and keep one in GR with my friends there and one in Detroit. I don't lose my keys...I just lock them in my car!!!

So that was my eventful evening. I will be posting soon about Dependence....as that is what God is being loud about these days and it had a spot lot put on it with this whole car key thing!
Posted by Kim at 8:14 PM 3 comments:

My goal list widget is frustrating me. I can see it fine. I can check things off of it perfectly. As far as I have been concerned it was working fine. Except you all have no idea what my goals are....nor can you celebrate as I check things off, unless of course if I blog specifically about something.

So just so you have SOME idea of what is on there until I figure that out....here is my current complete list of goals. (I may end up moving my blog to wordpress if I cannot figure this and a few other things out!)

And then of course there are the ones Adam added to my list for me. So these are Adam's goals for me.

Still on my way!